Demolition is the newest film starring Jake Gyllenhaal. He plays the role of Davis, a successful senior employee in his father in law’s company, living in a beautiful house, married to a beautiful woman who suddenly dies in a car accident, sending Davis in a state of shock for the main reason of not being shocked at all. Davis feels lost because he’s not truly feeling the way he was supposed to be feeling. He’s not sad, he’s not angry and he’s not even sure that he misses his wife. Now, that’s an insanely fantastic premise to start with, it’s where the film goes from here that raises the question marks. 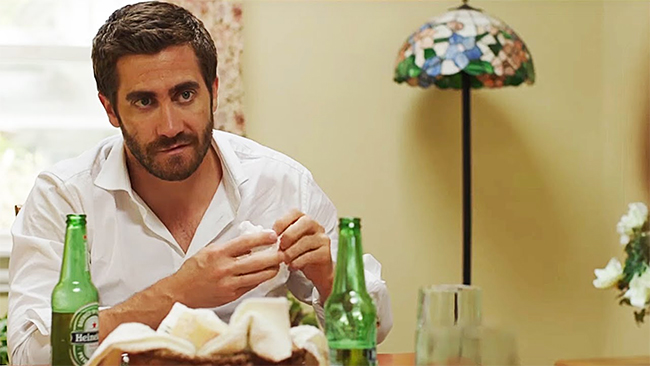 Jake Gyllenhaal is Davis in Demolition

Davis starts sending those letters to a vending machines company, starting with a complaint that one of their machines didn’t function the way it was supposed to, but not stopping here. The widower goes on and on about his situation, the death of his wife and basically everything about his life. The letters land on the desk of Karen from customer support, who sympathizes with Davis and invite him into her, and her young son Chris’, life. At the same time, Davis start developing a passion for breaking things apart, and later on destroying them and .. that’s where I lost all possible abilities to put things together myself.

Demolition is a strange sophisticated movie. It’s not easy to make sense of its purpose or even to fully grasp its narrative, though perfectly linear from a storytelling point of view. I couldn’t really tell how I feel about it until the two other people who were in the theatre decided to leave, around 15 minutes before the break, and thought it’s a no brainer that I’ll be leaving with them. It’s important here to clarify that I wasn’t with them, they just wondered how on earth I’m going to continue watching .. THAT! .. That’s how they put it down really directing their words to me. My answer was spontaneous: “I’m staying, I’m enjoying my time”.

It’s true that I enjoyed watching “Demolition”. First things first, I can never say that an hour and forty minutes in the company of Mr. Gyllenhaal is time wasted. He is definitely one of the most talented actor of his generation. The generation that is currently the main supplier of actors to play leading male roles, and what Jake Gyllenhaal needs to understand is that the lifetime of any generation in this category, is not really that long. I have zero takes on his portrayal of Davis and how he’s struggling to define and make sense of his emotions, or even his performance duels with Chris Cooper, Naomi Watts or Judah Lewis, in his excellent portrayal of Chris. It’s only that, after “Southpaw”, I thought he should’ve gone with a safer bet.

What I also enjoyed a lot is the editing job on the sequences that the movie is made of. I’m usually not the kind of critic who can judge the quality of editing, but in this case you can sense a rhythm and a philosophy on how those scenes were orchestrated. I give it to Jean-Marc Vallée for being one the best working directors in using music and songs as key components in the editing work of a certain scene. He’s done it in “Wild” and mostly in “Dallas Buyers Club”. Here in “Demolition”, it can be his most plausible achievement and especially in the scene with the song “Crazy on You” playing.

I enjoyed “Demolition”, but that doesn’t mean that I can’t fill a few letters of complaints myself. The restless focus on keeping all messages and emotions indirect can be exhausting at times. Some script lines were deliberately removed, after being used in the trailer, to prevent our characters from reaching out to us with a clue or two. The direct result of this indirect approach is the absence of logical flow of cause and consequence. I personally enjoyed some scenes and sequences after finding myself in the middle of them, I couldn’t really tell why I’m here or where I will find myself in the next phase. After the repetitive occurrence of this confusion, I stopped caring.

For the best of my guesses, “Vallée” is once again exploring loss, sorrow and mourning, and how different people deal with it if they can really break free from pretending in order to meet expectations. He did it before in “Wild” and it worked because the flow, which had its share of artistic montages and indirect messages, made sense in the bigger picture. In “Demolition”, the script and the narrative did a thorough job hiding the essence of the story, that I don’t think a lot of people can find it.