Hacksaw Ridge | Don’t be fooled! It is a war movie!" data-count="horizontal" data-via="mmahdy78">

When I first read the premise of “Hacksaw Ridge” and watched the trailer, my first guess was that it will be an in depth human drama of values in the face of ignorance with a war happening somewhere in a blurry background. The relatively modest production budget of 40M made me even more confident about my prediction and I really saw no problem with it! I was actually eager to see what Mel Gibson would do on a more toned down drama and with a significantly noteworthy cast for the first time. My expectations weren’t exactly false, the dramatic layers of his 4th directorial feature were solid and engaging but, don’t be fooled, this is a war movie! 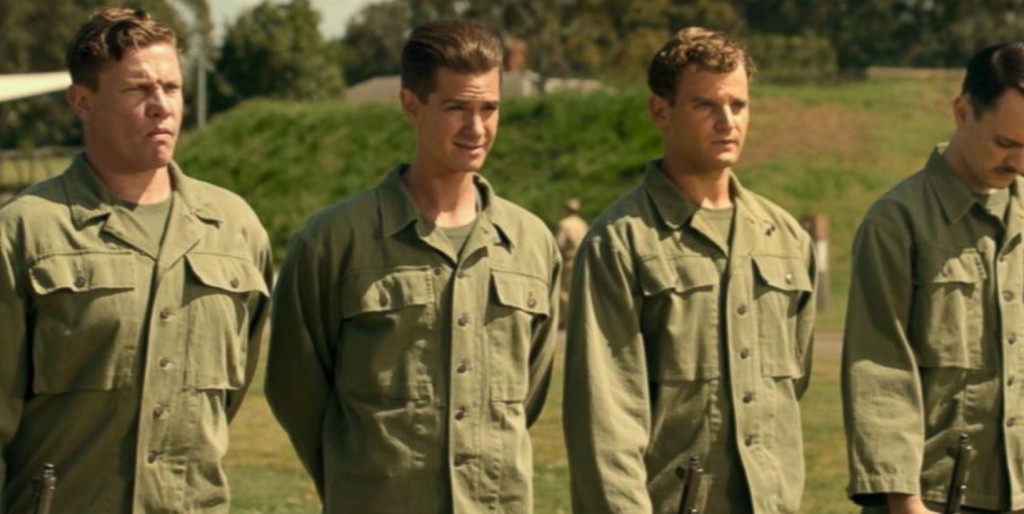 “Hacksaw Ridge” tells the remarkable true story of “Desmond Doss”; the first and only conscientious objector to receive the Medal of Honor in World War II. Doss was more like a “conscientious collaborator” and I quote his onscreen character. His objective is not to evade military service. He actually volunteered, but wanted to preserve and honor his principles by refusing to carry a weapon. Young Desmond was not easily welcomed in his unit because his innocent values were regarded as signs of rebellion by his superiors and acts of cowardice by his peers.

The first half of the film deals with this moral predicament and showcases the struggles that Doss had to suffer in order to be accepted in the army as a medic. The second half however is nothing short of elaborate warfare. We get to engage with Mr. Gibson’s take on the battle of Okinawa and, specifically, the confrontation against Japanese forces on the Maeda Escarpment, nicknamed “Hacksaw Ridge”, during world war 2, and we witness it from, and beyond, the perspective of Doss.

A key question that popped to my mind while watching “Hacksaw Ridge” is how on earth such a story had to wait for so long to be made in a movie. A lot of far inferior stories from the near past are currently being made into inspirational films without even having the dramatic structure enabling it to be told in over 5 minutes in a family gathering. As I read about the process of developing the project, I learned that one of the reasons behind the delay is that the real “Desmond Doss” demanded the highest levels of accuracy in order for his story to be made into a film, making this one of the most loyal cinematic adaptations in history. In all cases, I’m extremely grateful for the series of events leading this project to land in Gibson’s lap.

Mel Gibson’s accomplishments can be fairly divided between the two faces of the movie. Of course we have the artistic and technical achievements in his depiction of war and combat in the second half. However the dramatic achievements in building our key character and allowing Andrew Garfield to deliver a career defining performance across the two main phases of the movie are not to be undermined.

As I mentioned, this is the probably the shiniest group of stars that Mel Gibson ever had to direct. In “Braveheart” he was the main attraction, in “The Passion of the Christ” the cast was less than impressive and we barely even knew anybody in “Apocalypto”. In “Hacksaw Ridge”, we have The Amazing Spider Man star in the leading role and we have a very interesting supporting duo consisting of Matthew Vaughn, taking the space to display fine dramatic moments in addition to his signature comedy, and Sam Worthington with a grounded but appreciable performance.

However, if a reward nod is to come in the direction of the supporting performances in “Hacksaw Ridge”, I believe it will be for Hugo Weaving’s performance in the role of Doss’s father; an alcoholic veteran with war demons overshadowing his family life. It is a common character in similar movies but a fresh portrayal by Weaving delivering a true struggle in every moment we experienced with him on the screen, which was sadly cut short as he’s not part of the entire second half of the movie; the war half.

Violence was never a stranger to Mel Gibson’s creative sadism. Unlike how other filmmakers utilize violence, and no matter how shocking it might get, Gibson’s violence is very elaborate and lacks the contrasting relief once we cross those bloody waters. It’s not a nihilistic take on violence, redemption always comes in a satisfying form. It’s just that you can’t catch a breather with Mel Gibson when he turns mean on his audience. The war sequences in “Hacksaw Ridge” are horrifying, long and they hit with high succession. They deliver an overdose of fear to the audience and to the title character, whose redemption comes in the form of great courage masterfully captured by the camera work of Simon Duggan.

The script by Robert Schenkkan and Andrew Knight is solid and follows a linear timeline with the few flashback exceptions from Doss’s childhood. The dialogue might’ve suffered from a few moments of overly articulated phrases that are not very convincing to come from the profiles of our characters or to be spoken in such situations.

“Hacksaw Ridge” brings with it the sweet breeze of fine cinema that we’re expecting to inhale in larger volumes with the awards season approaching. It restores faith in the possibility of larger than life stories with notable dramatic, technical and artistic achievements without a larger than life budget. I rate “Hacksaw Ridge” at 9.5/10.

Hacksaw Ridge | Don’t be fooled! It is a war movie!" data-count="horizontal" data-via="mmahdy78">