I Care a Lot | Forgetting Something, Are We?" data-count="horizontal" data-via="mmahdy78">

“I Care a lot” is one of the newest releases of Netflix, as far as films are concerned, and it deals with a case of system manipulation in the United states allowing the exploitation of senior citizens. A very disturbing situation, though I’m not sure about the extent of how realistic it is. 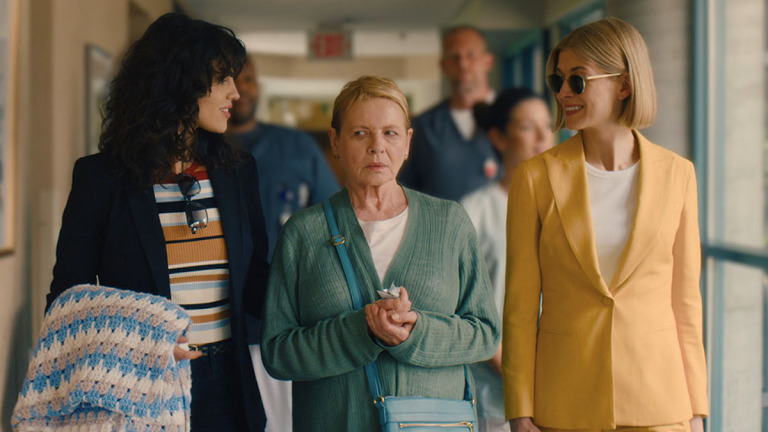 Our story starts with Marla Grayson, who runs a con that begins with clinics tipping her on the profiles of certain old patients who appear to have little complications in their lives, as well as valuable possessions. Marla then manages to get a court order forcing herself as their caretaker and legal guardian, and that’s when she suddenly appears at their doorstep and accompanies them to a senior citizens care facility. She strips them off any means for contacting the outside world and starts liquidating their belongings to her own benefit. The elaborate scam allowed Marla to build a successful business, until one day she goes after the wrong target; Jennifer Peterson, who has connections to powerful and dangerous people with every intention to liberate her from Marla’s grip.

The early stages of “I Care a Lot” are the best. The exploration of Marla’s horrifying business plan and the explanation of the different sides that allow it to go on and grow. A phase that was mostly light in mood though that didn’t take anything from how shocked I felt watching it. It’s one thing to imagine being a victim to such a scam and a whole different thing to realise that it’s all legal and takes place in broad daylight. The opening chapter reminded me of the best films that ever discussed serious issues caused by serious holes in the system. However, very early on, our story took a turn that I’m not a big fan of.

Our story put the issue at hand to rest and focused on a small story. The story of the wrong woman being targeted and the gangster who’s now after Marla’s neck. A story heading in a direction that I don’t like can toss a film outside my list of favourites but I would never deny that it’s a good film if the story it embraced is good, which is certainly not the case here. Our little story is not good .. it is rather flawed.

My biggest problem with “I Care a Lot” is that it doesn’t have a protagonist. I would never root for either of the two sides whose conflict is what the film focuses on for the most part. Who can I possibly lean towards? Marla or Roman? The con artist that imprisons old people, forbids them from seeing their loved ones, steals their belongings and leaves them to die? Or the human trafficker? I didn’t invent any of those descriptions, it’s all in the exposition of the characters, the film made sure we understand that!

When I say the film lacks a protagonist, I’m not referring to a “Robin Hood”! Many good films were about the conflict among mostly negative characters but we always had a quality that makes us feel for one character and hope he would win. In “I Care a Lot” whenever a character, who is not an inmate in Marla’s prison, was in danger, I would find myself hoping that he/she would die in the worst of ways.

Let’s imagine that there was indeed a factor that I totally missed, that would transform any of our characters into the lamest possible form of protagonists, would that make “I Care a Lot” a good film? Definitely not! Our various chapters and stages were unreasonably convenient. The mob boss, the criminal mastermind with unlimited resources, could only make stupid plans. Though he did demonstrate his ability to come up with good plans. Ones that are simple and effective. However when he’s up against Marla, his plans are always complicated with growing chances of failure in order to help the film to keep going. That of course was not the case with the other side.

Even when reaching outside her acceptable scope of skills and expertise, Marla is always a winner. I mean, I can buy her triumphs in legal battles and even in mind games, but in physical confrontations as well? .. Come on!!

Most of the time, the film committed to the light spirit. Which was a good decision that didn’t compromise the seriousness of the case at hand and further supported the dark comedic quality of the events. And a dark comedy is the best way to describe the film. One with effective dramatic intermissions and acceptable action breaks pushing the development of the eternal struggle between David and Goliath.. that’s if David was a bloodsucker of helpless old people. Probably the only thing that kept me going with the film is the charismatic nature of the acting talents that starred in the film.

Rosamund Pike is finally back in the form of “Gone Girl”, where she played a murdering monster but with reasons to cheer for. She offered the full profile of how a character like that can be formed and can stand in the face of real danger to keep her way of life. That was not something her character said, it’s all her performance. Pike has an amazing solo performance for a long sequence that was all about her character. It was difficult, physical and complicated but it was also very well directed although it reminded me a lot with another sequence in “Kill Bill”.

I don’t have much to say about Peter Dinklage’s performance but he will always be a welcomed addition to anything he appears in. Best performance in the film, in my opinion, though has to be that of Dianne Wiest, and the way she sold the transformation from being just another victim to an intimidating figure. The performances in “I Care a Lot” deserved a better film.

“I Care a Lot” told a story about a dangerous issue in a manner that is not good and rather cowardly. It sympathized with authorities and acquitted the judge and the police by simply labeling them with ignorance and stupidity. What could’ve saved the film were the acting performances if only I didn’t want all the characters to die in the first 15 minutes. I can only treat some movies like football matches, if I can’t find a side to cheer for, then I just can’t enjoy.

I Care a Lot | Forgetting Something, Are We?" data-count="horizontal" data-via="mmahdy78">