“Project Power” is a Netflix film with two high profile actors in the lead and a return to movies (with 7500 also released this year) for Joseph Gordon-Levitt after 4 years of absence since the release of “Snowden”. 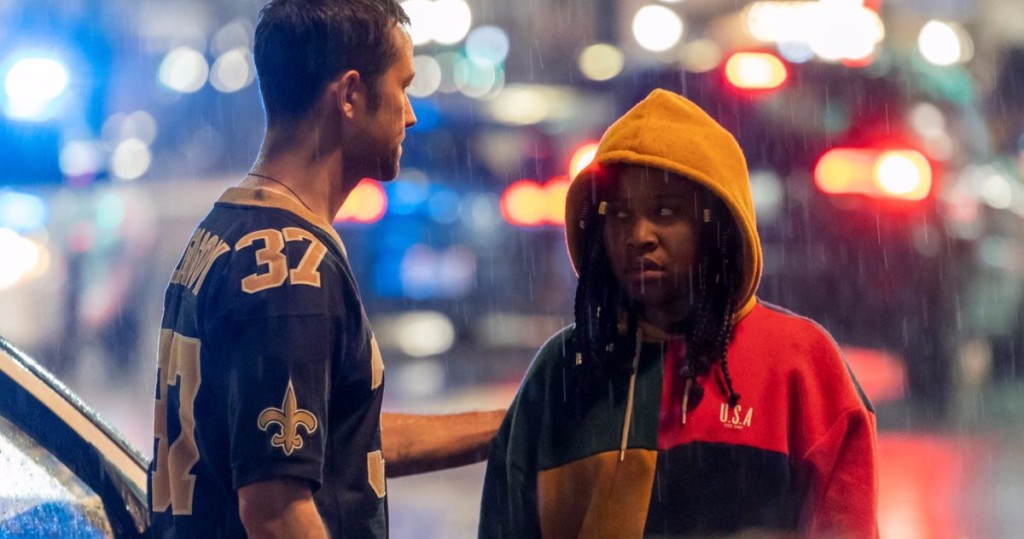 Dominique Fishback shines in her role as Robin in Project Power

Our events take place in New Orleans over the course of one day and one night. Word begins to spread about a mysterious new pill that unlocks superpowers unique to each person. The catch is that you don’t know what will happen until you take it. While some develop real superpowers for 5 minutes, others face destructive changes. When crime escalates in the city with the spread of the pill, an unlikely team is formed to fight it. Consisting of Frank, the local cop, and a teenage dealer called Robin. In addition to Art who is believed to be a competitor for control over the market of the pill, but might have another agenda.

From the early moments you sense the film follows a unique directorial philosophy. One that is visually messy and reflects the truth of the environment. Pace is fast and characters’ connections are built through events, no introductions. There’s a musical identity to each sequence separating it and marking its start and end. Can’t say that I was a fan of it but I respect the approach and what it takes to establish it. On the story level, the idea is fresh and there’s a lot of wait for and discover. Anticipation is built before seeing the powers in action for the first time. We can’t tell what it will be like and what it will do to our characters. The first encounter is great in all terms and adds further complications and unique layers to the concept of superpowers in the scope of the story. I can say that the film gets to half point with little problems and lots of good things both artistically and dramatically.

Most important dramatic achievement in my opinion is the formation of the characters. It gave us two important characters in separate quests that are destined to clash, and the most important character of the film exactly in the middle. That’s Robin, played by Dominique Fishback, and she is hands down the most interesting character in the film and certainly the most interesting performance as well. Combining innocence with street smarts and unique rapping performances. Developing chemistry and harmony on each scene with the film’s stars.

So everything was going fairly fine until the second half kicked off. That’s when the whole scope of the screenplay is materialized and you find out that it really had nothing in it other than a good idea and interesting characters. This is the first full feature screenplay for Mattson Tomlin who co-wrote the screenplay of the most anticipated “The Batman”. Tomlin might turn out to be a great screenwriter but I really look at this screenplay and I think .. What’s so unique about it?! What is so special to attract two large names, a production decision and a spot on Netflix. The idea? Well the idea is great, but I hear high concept ideas like this from aspiring writers all the time and I always think, this can’t be enough to make a good screenplay, let alone a good film. Without attractive dramatic layers, a worthy struggle on both sides of our conflict, a solid structure of chapters, and awareness to balance concept with application .. then anybody can be a writer. That’s exactly what the second part of the film proves to be lacking.

Our heroes take up with the whole story, the villains appear to be just an idea. A unique idea that is actually interesting too but with no build up to a real threat that can help us in anticipating the concluding chapters. The conclusion of the quests of our heroes proves to be childish. The ending chapters were predictable and heavily reliant on elements of action and fantasy, and this is where the film suffers the most, because it doesn’t seem like a lot of budget was allocated to exhibit the superpowers of the various characters. Early on, when we had to witness it on 1 or 2 characters transformations it was very good. Later on when it became the dominant element, it appeared to be flawed. Shots were not clear, unpractical angles were used to avoid scrutiny. They even went as far as using a real person with real abilities such as bending one’s joints in weird angles then just adding one super poor CGI touch effect to conclude the super power.

It’s important when we criticize a factor such as the depiction of superpowers that we don’t deny how difficult it is or discount the amount of effort it took to get it to where it is. Directors Henry Joost and Ariel Schulman actually took a classic approach in filming those sequences and in exhibiting those powers. Minimal CGI was used. Rodrigo Santoro who played “Biggie” in the film had to sit on the makeup chair for 9 hours with artist Mike Marino to be transformed into his pill transformed self and film what I believe was less than a minute of screen time that I initially thought was entirely the work of computer graphics. However, it will be totally unfair to those who did it right if we say that the work on Project Power was as good as theirs.

What helps the film survive its second chapter is only the charismatic presence of its leads and especially, again, Dominique Fishback. Don’t get me wrong, Joseph Gordon Levitt and Jaimie Foxx are very good in the film and they didn’t feel like treating it lightly or anything. I meant this as a compliment but I know it came out looking like a criticism.

Project Power was entertaining to a large extent during the first half but became difficult to endure in the second. It is built on a unique and interesting concept, but a concept is never enough to give a good film, even if supported by great talents and decent vision in execution. Even if it takes the hard path of avoiding CGI to grant a real look. I would personally take good CGI over mediocre usage of makeup.