Knives Out offers a new take on the whodunit murder mystery. It’s the core skeleton to a lot of Agatha Christie’s work, which a lot of people grew up, or still are growing up, reading. Last time it showed in cinema was in 2017 with Agatha Christie’s own “Murder on the Orient Express”, which I personally liked but thought was too focused on the crime and the detective with negligible attention to the drama of the story and the characters despite the stellar cast. That’s exactly where Knives Out excels. 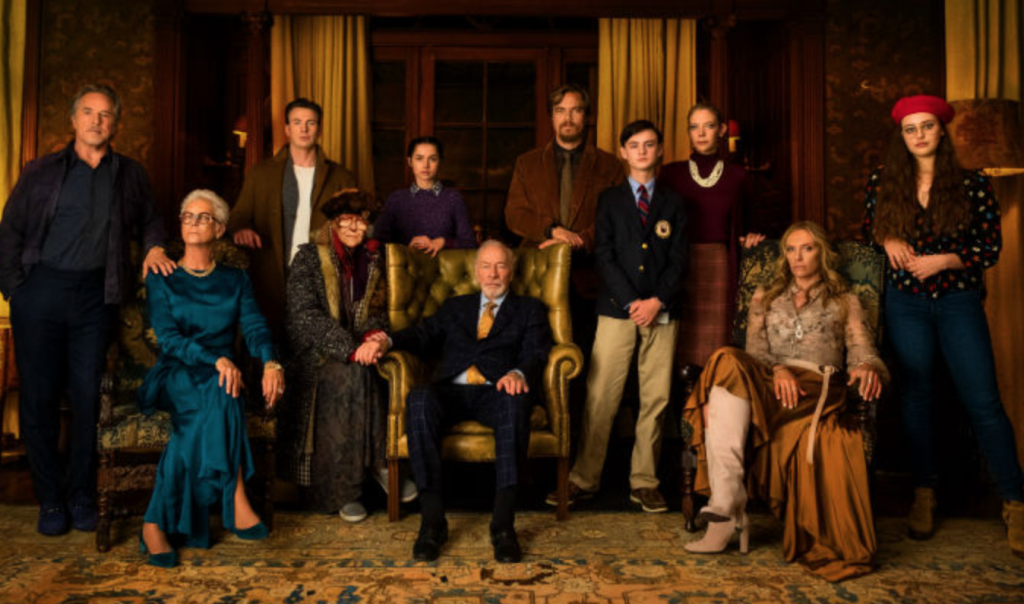 A Stellar Cast Star in Rian Johnson’s “Knives Out”

Events of Knives Out revolve around the mystery of the death of Wealthy crime novelist Harlan Thrombey, who was discovered with his throat slit in his mansion on the following morning of his 85th birthday party, to which he had invited all members of his family. The murder is, at first, believed to be a suicide, but private detective Benoit Blanc soon arrives explaining that he was hired by an anonymous figure to investigate the incident. As soon as the investigations begin, a lot of reasons begin to emerge that this might be a murder.

Our film utilizes the crime as a driver for drama and emotions, yet without totally neglecting or over simplifying it. We still have all the twists and turns that you would expect in a story like this. In fact the film is too smart with the crime investigation element that it keeps changing the core question. We start by asking “who has done it?”, but at various stages the key question shifts to “how?” And “why?”. As a matter of fact at certain points the entire concept of the crime changes. This worked great in hiding how some proceedings of our riddle might be a bit too convenient. In my mind this is the only problem with the film.

By shifting the question, or the center of attention, we get further complications in the relationships and bigger chances to move the spotlight from one character to the other, offering our cast of stars to actually perform and showcase their talent. Once again, unlike Murder on the Orient Express, this film has a central character and it’s not the detective. It’s Marta Cabrera the nurse who was portrayed by Ana De Armas. I first saw De Armas in Blade Runner 2049 and back then she seemed to be headed towards great things and she offers further proof in this film, by being the key player in various heated situations in the face of acknowledged actors and carrying her full weight.

Everybody gets share of attention in this film. No talent is wasted though no situation is unnecessarily forced. There’re 3 performances, besides that of De Armas of course, that I really loved. Christopher Plummer who plays the victim and does much more than simply portray a murder victim. Michael Shannon and maybe because I’m generally biased towards his talent, but he really brings his weirdness and intimidating nature to the full benefit of his character. In addition to Chris Evans who’s gonna make it difficult for everybody to actually believe he was ever Captain America.

What makes drama of the film truly special is the fact that it’s multilayered and completely derived from the characters. The film offers an interesting perspective on greed and arrogance. Not a straightforward one, our characters all seem like real and reasonable people. Throughout the film, most of them behave in a way that seems logical to us if we were in their shoes. However, with a crime at hand, and with important decisions presented, we get a sense of how harmful this benign greed and self-absorbing nature can be.

The film even delivers a couple of smart sociopolitical pinches and they work fine because they’re also not forced and because they serve an important purpose in key decisions throughout the film. Artistically the film plays a little with the Rashomon effect, repeating the same sequences from various point of views and there’s efficient and noteworthy utilisation of various visual elements. It never steals from the two key elements though, which again are the drama and riddle at hand.

Knives Out is further proof that the key factor that helped several films in 2019 be exceptionally successful is risk taking. Using a classic genre and twisting it. Risk people coming to it with expectations and finding something else. It takes courage and Rian Johnson’s courage paid off massively in this case. As we can see, the film is not just an entertaining experience, though of course it is, but it’s also one of the significant films of the year with a fair chance at having a rather long lifetime in our attention.