Allegiant | Nothing Wrong with the Genre .. It’s just a Bad Movie" data-count="horizontal" data-via="mmahdy78">

In March 2012, the first movie of “The Hunger Games” franchise was released, marking the inauguration of a new movies genre, targeting the “Young Adults” segment of the cinema goers with serious plots where characters can actually die. 4 years, and 8 movies later (counting the films in “The Hunger Games”, “Divergent” and “The Maze Runner” series), people are starting to question whether that whole wave should’ve existed at all, and it’s all because of that 8th film. 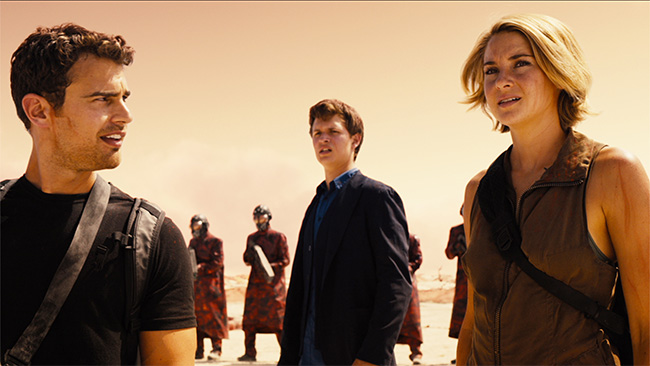 In the 3rd installment of the “Divergent” series, we see our usual gang of 5 (Tris, Four, Caleb, Christina and forcibly Peter) still in Chicago after the death of Jeanine which allowed for Evelyn to take charge. Under her regime, the factions systems has been retired, but she still wouldn’t allow for the fence to be open claiming that it’s for the protection of her own people. That doesn’t sit well with Four and Tris, who plot a successful plan to breach the borders. Once outside Chicago, our team is greeted by a new community headed by David (played by Jeff Daniels). David explains that their whole life was just an experiment to reveal the divergent ones among them, because the salvation of the new world depends on them, and especially “Tris”, who is actually the most special among them all. Four then discovers that David’s plan are not as innocent as he claims, and he tries to persuade “Tris” to head back to Chicago in order to warn Evelyn and end the unrest.

Allegiant is not exceptionally boring, not any more than the two earlier parts anyways, but it’s not a well executed film. It is not the kind of movie that you would enjoy while trying to pay attention to details or doubt the logic of events with such questions as; why do people always arrive late to places despite their huge head start? And how come the only explanation offered for some technologies that don’t make any sense, especially surveillance related ones, is evolution?!!

The 3rd installment is, unfortunately, not the last one. We’re still in for one last film titled “Ascendant”, and I believe it shows how disappointed I am with part 3 when I say that I have no interest in watching that last episode. I really don’t care what will happen to any of the characters and I have no questions worth spending 2 hours to have answered. Allegiant is based on the book by Veronica Roth with the same title, which also holds the number 3 in the order of events, although it had the decency of being the last one. Screenwriters Adam Cooper, Bill Collage and Noah Oppenheim are the ones responsible for reshaping a lot of the events in this book so it can fit in two cinematic parts, and it really doesn’t.

Much less action takes place in this movie, although I have to say that it was exciting while it lasted. Coupled with the established assumption that characters can really die, you get a good share of anticipation while watching. However for the most part of the film we’re just watching characters talking, not in dialogue that is worth following, and we get a great deal of showcasing technologies and gadgets that aren’t really explicable.

In terms of performance, the only thing worth mentioning about Shailene Woodley is that she managed to enhance a lot in the hair department. One more time she manages to change her hairstyle, and this time it was for a the better after that angry boy look from “Insurgent”. Woodley is one of the most promising young talents, but unlike what “The Hunger Games” did for Jennifer Lawrence, “The Divergent Series” left little room for her to do much else. In 3 years she only managed “The Fault in our Stars” outside “The Divergent” series and I believe this is a lot of time wasted. A lot is at stake for her when “Snowden” hits theatres later this year.

The most important name in the cast is Miles Teller, playing the most interesting character in the film. Peter is unpredictable, he can pull a real gutsy, or a real stinky, move at any point, and Teller brings a lot of wit and fun to the role. It is just that, after “Whiplash”, you would’ve expected to see him in better and bigger roles. The same cannot be said about “Theo James” in the role of “Four”. He should really try to enjoy having the key character over Teller in a movie because this is not expected to take place again. Probably this is why James remains preferable to me over anybody else in the cast. He hasn’t grown much bigger than the movie itself and he received a lot of help from his character, a troubled one with much conflict in his past and his future.

Jeannine’s death marks the end of hard work for the older cast members. Naomi Watts’ portrayal of “Evelyn” was very poor, perhaps because “Evelyn” herself is such a lousy character. There aren’t much explanations for her decisions and choices through the film. As for David, I really don’t believe what he showed in this part called for the intervention of such a great talent as Jeff Daniel’s. Maybe more will come out of his sleeves in the last film, not sure if I will be there to witness it though.

The newly found “Young Adult” audience segment received a big blow by “Allegiant”. It’s one of the rarest times where I find myself tempted to advise people against watching this film, and the key reason is that there isn’t much new to witness. The movie is following the footsteps of “The Hunger Games” only clumsily. “The Maze Runner” franchise is not so different either, but I will give it the credit of arriving at the same point of the other two titles, only in less films.

I just hope for The Divergent Series to rest in peace painlessly, and I hope it doesn’t cause more harm to the genre, or to the careers of such promising talents as Woodley and Teller.

Allegiant | Nothing Wrong with the Genre .. It’s just a Bad Movie" data-count="horizontal" data-via="mmahdy78">