The Witch, full title: “The Witch: A New England Folktale” is a movie that tracks fictional events taking place in New England in the 17th century. The movie starts with our title character William being exiled from a New England plantation due to “prideful conceit” .. whatever that means! William takes his family, consisting of his wife “Katherine”, his daughter “Thomasin”, his son “Caleb” and his youngest twins “Mercy” and “Jonas”, and tries to kick start his own farm on a piece of land surrounded by a forest. A few months later, we see the family struggling to make ends meet in the presence of newborn “Samuel”. A wave of upsetting events take place when “Samuel” disappears on Thomasin’s watch. The tragedies put the extreme faith of William and Katherine to the test, now that it became clear that a form of evil lives nearby in the forest. 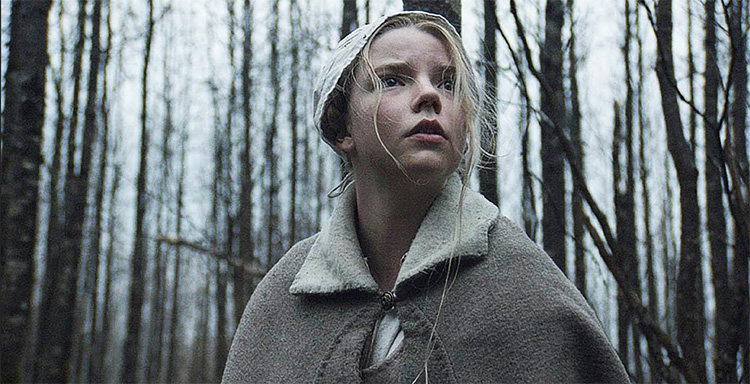 Anya Taylor-Joy is Thomasin in The Witch

What we should’ve found around that forest as well was the horror that the movie promises, and just like Samuel, all those promises go missing early on in the movie. First, I find it necessary to highlight that I watched the movie in Cairo, Egypt, and censorship wasn’t at all kind with the final product I watched. Cinemas are never tolerant of nudity where I live, and it’s probably our bad luck that most of the horrific events in the movie came hand in hand with some nudes. I can’t say for sure, but it’s hard to imagine that those few minutes could’ve turned my opinion all the way around, and therefore I’ll say it with confidence; The Witch .. is not scary!

Associating the movie with mysteries and thrillers sounds more fitting to me, and leaves me with enough preparations to appreciate the beautiful picture that Robert Eggers introduced on his long feature debut. Eggers’ vision for extreme faith violently challenged in 17th century New England is definitely mesmerizing. Coming from a production/costume design background himself, it’s easy to see how he showcased his qualifications in this opportunity. The grim and cruel surroundings are well reflected in the overall dark theme of the picture, with very careful natural lighting supplying a clear picture with no visual discomfort, and yet enough reasons to be concerned about the characters and the lurking dangers.

I found myself in complete disconnection with the objectives of the script though. I’ll play my geographical location card one more time. See, where I live, we don’t appreciate witch stories all that much. The horror stories we heard as kids had very few, and generally unintimidating, witches in them. Being a collection of folktales and documented sightings, as explained in the movie’s final frame, I couldn’t relate to the source of creepiness in the events I’m watching. I would speculate though that a movie bringing the worse of my childhood fears in such a believable story can be an unsettling experience. That’s as far as entertainment goes for me.

The struggles of our characters, however, were much more intriguing. The introduction of their religious visions and watching them being questioned by little Caleb set the stage for what’s to come. When the farm economy proves ineffective, the harshly stricken family resorts to prayers and calls for reasonable divine interventions, and when matters worsen their faith emerges as the key defining factor of their identity, rather than the bonds that a loving family should have. I found it interesting to see what some devilish strategies can do to turn strong faith into a tool of destruction.

The character that captures most of our attention is Thomasin since she’s the most human among the whole bunch. Most of her religious commitments are sensed to be her way of connecting with her parents, and she faces that dark chapter of her family’s life with reasonable grief and fear, unlike other members. In her portrayal for the role, Anya Taylor-Joy was a trustworthy companion for the viewer. I would like to believe that it was us, the viewers, with Thomasin against everybody and everything else.

The best performance belongs to Harvey Scrimshaw in the role of Caleb though. Caleb is not as manipulative as Thomasin. They both are kind and innocent, but Caleb tends to be straightforward with his emotions. You sympathize with Thomasin, but you love Caleb and most of that love comes from the portrayal of Scrimshaw, who stole the movie with one scene where he delivered a performance so skillful, it would take any actor months of practice to master it.

“The Witch” is a horror tale that doesn’t scare that much and a mystery that I didn’t really care about uncovering. Solid performances from everyone and a beautiful picture that I appreciated, but couldn’t really enjoy since I went to the cinema with expectations to be thrilled.